The United Arts Council of Raleigh & Wake County and the Greater Raleigh Chamber of Commerce have recently honored Robert C. Morrow as their Individual 2013 Supporter of the Arts. 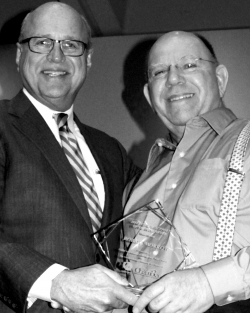 Bob Morrow is honored to accept the Business Support of the Arts – Individual award presented by Harvey Schmitt, president and CEO of the Greater Raleigh Chamber of Commerce.

Each year, both entities join to recognize businesses, organizations, and individuals who have made the most remarkable contribution to the arts in the city of Raleigh. As this year’s honoree, Robert Morrow has spent the past 15 years contributing a great amount of time and creative energy towards his work with the Philharmonic Association in Wake County. Having been responsible for the artwork, website design, and the training of others in graphic arts within the Association, his contributions and expertise have helped the Association thrive.

In addition, Robert was also recognized for having founded and publish the very popular online publication, Triangle Arts and Entertainment, which has served as a voice for local visual and performing arts in the area for an audience with greatly varied taste. The website attracts more than 25,000 monthly visitors, connecting the vibrant arts and entertainment community in The Triangle with new patrons.

The nomination for the award received read, “Robert Morrow makes the Triangle a better place to live…”. Honored to accept the award, Morrow thanked the United Arts Council, Greater Raleigh Chamber of Commerce, as well as his fellow artists and supporters of the arts. He plans to continue his work with both the Philharmonic Association and the online magazine Triangle Arts and Entertainment as his way of supporting the arts in central North Carolina.

For more information on the arts in the Triangle, visit http://triangleartsandentertainment.org.